The BDS War Against Israel

From the day of its founding, Israel has been under attack—with tanks, rockets, and propaganda.

In need of new tactics, Israel’s foes have opened up a new front: A well-funded, global campaign to demonize Israel as a racist, “Apartheid” state. The Boycott, Divestment and

Sanctions (BDS) movement has captured the attentions of idealistic youth and dedicated radicals around the world, either unaware or uncaring that they are being cynically manipulated. An alliance of some of the worst state and non-state actors on the world stage, BDS represents an existential threat to the future of Israel—one that cannot be ignored by her or her allies.

The BDS War Against Israel is the first book that exposes the methods, motivations, underlying ideology, and sources of funding for the BDS movement. It is an indispensable guide to understanding how to defeat BDS in the media, on campus, and in public opinion. 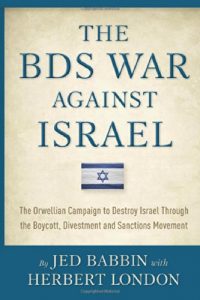